VDL works on building ‘the world's biggest eye on the sky’

VDL ETG Projects, part of VDL Groep, will build the supporting structure for the main mirror of the Extremely Large Telescope (ELT) in northern Chile. At an elevation of over 3 km, this is where the ESO (European Southern Observatory) will build the world's largest telescope. The supporting structure consists of 798 individual support structures for mirror segments, which together form the telescope's main mirror (with a diameter of over 39 metres). The order, which VDL ETG Projects will deliver over the course of five years, is worth several tens of millions of euros.

ESO Director General Xavier Barcons and VDL Groep President and CEO Willem van der Leegte signed the contract for the order today at the headquarters of the European Southern Observatory in Garching (near Munich), Germany. Willem van der Leegte says, “It is wonderful that ESO has awarded us this prestigious order. This is the first time an astronomy-related contract of this size has gone to a Dutch party. This project is a great calling card for European high-tech industry. This will further boost VDL Groep's reputation as a high-tech player and will be a springboard to our involvement in more new telescopes that ESO is building around the world.” 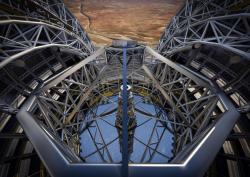 The ELT is similar in size to a football stadium. The ‘eye’ of the telescope is nearly as large as half a football field and will capture more light than all other existing large, professional optical telescopes collectively. The ELT will enable new scientific discoveries related to planets, the composition of nearby galaxies and the deep universe. The hexagonal, mechatronic supporting structure holds the primary mirror of the telescope in the desired shape with nanometre precision. VDL ETG Projects will take responsibility for the construction of these structures. The design was created in collaboration with the Netherlands Organisation for Applied Scientific Research (TNO), with support from the Netherlands Research School for Astronomy (NOVA). The main mirror with adaptive control system will form the largest-ever telescope for visible-light observations.

It is impossible to make the 39-metre main mirror as a single element, so the mirror will be constructed from 798 hexagonal mirror segments, each approximately 1.4 metres across and 5 centimetres thick. Each mirror segment has its own support structure and will be driven by multiple electric motors, allowing the mirror to be positioned very precisely. The continuous correction is achieved by nine electric motors on each frame and three electric motors under each frame. The mirrors will have to be swapped out on a regular basis to have a new reflective layer applied. Therefore nearly 950 mirror segments and supporting structures are being built.

A total of around one billion euros has been made available for the ELT project. Construction of the ELT's foundation has already begun. The telescope should be operational in 2024. 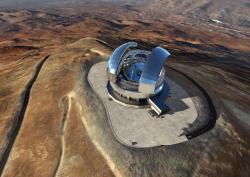 VDL ETG Projects has been working with ELT for just under ten years. The first prototypes for the telescope support structure were built in collaboration with TNO in 2010. Four years on, in 2014, VDL and TNO entered a contract with NOVA for design of the final prototypes of the support structures and the construction of six frames. TNO will use their experience in the field of optical instrumentation and precision mechanics for aerospace, astronomy and the semiconductor industry for the design and testing of structures that must be positioned at the nanometre scale (millionths of a millimetre). VDL ETG, also with extensive experience in the semiconductor industry as well as the analytical and science & technology segments, are contributing their expertise for the optimization of precision mechatronic system designs for cost management, reliability and maintenance. This will make it possible to implement the final design in a cost-effective manner based on mass production. NOVA, the alliance of the astronomical institutes of Dutch universities, have specialized knowledge of the use of large telescopes and optimization of the interaction between the telescope and its scientific instrumentation. Collectively, they will ensure ESO optimum synergy between all these key disciplines. Today's order, awarded to VDL ETG Projects, comprises the series production of the supporting structure. The European Southern Observatory (ESO) is the foremost intergovernmental astronomy organisation in Europe and the world’s most productive ground-based astronomical observatory by far. It has 15 member states: Austria, Belgium, the Czech Republic, Denmark, France, Finland, Germany, Italy, the Netherlands, Poland, Portugal, Spain, Sweden, Switzerland and the United Kingdom, along with the host state of Chile and with Australia as a strategic partner. ESO carries out an ambitious programme focused on the design, construction and operation of powerful ground-based observing facilities enabling astronomers to make important scientific discoveries. ESO also plays a leading role in promoting and organising cooperation in astronomical research. ESO operates three unique world-class observing sites in Chile: La Silla, Paranal and Chajnantor. At Paranal, ESO operates the Very Large Telescope and its world-leading Very Large Telescope Interferometer as well as two survey telescopes, VISTA working in the infrared and the visible-light VLT Survey Telescope. ESO is also a major partner in two facilities on Chajnantor, APEX and ALMA, the largest astronomical project in existence. And on Cerro Armazones, close to Paranal, ESO is building the 39-metre Extremely Large Telescope, the ELT, which will become ‘the world’s biggest eye on the sky’. ESO's headquarters are located in Garching (near Munich) in Germany.